Gamers are always on the lookout for the best gaming headset available that will help them not miss a single in-game sound or simply a headset with great sound/mic quality. Every company comes up with unique selling points to market their headsets but Sennheiser keeps it easy and simple. Our Sennheiser GSP 302 review examines this gaming headset from Sennheiser which comes with closed acoustics for improved clarity and bass while you are engrossed in your game. Read the full review below to find out why we enjoyed testing the Sennheiser GSP 302. 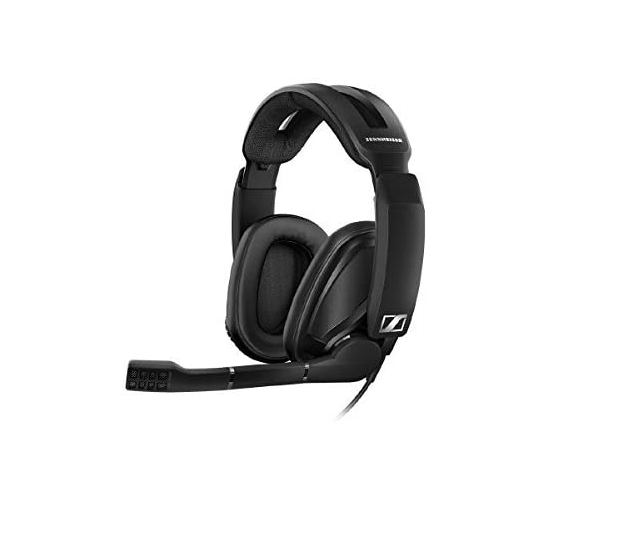 Gaming headsets out there today, whether for console or PC gaming, all have some similarities in their physical look. A large band rests flat on your head and serves as the connector between two ear cups. Sennheiser went for a similar design with the Sennheiser GSP 302, which isn’t bad. After all, if it ain’t broke, don’t fix it.

The ear cup on the left side of the GSP 302 is the one that has the acoustic mic, which can be moved up and down at any time you want to mute the headset to prevent other people from hearing you. Both earcups are slightly tilted forward. This not only looks cool but also provides comfort to the user’s ears. There is a cord at the back of the mic, leading from the headset to the splitter. The Sennheiser logo is placed right before the starting point of the band.

The headband itself has an underneath layer made of foam material so that there is some form of cushion to prevent pressure on the top of your head after spending several hours playing games. There is another Sennheiser logo on the right side of the Sennheiser GSP 302 headset, and a volume control is just below the logo.

The 4ft long cable has a splitter at the end. One end is exclusively for use with the mic while the other will be used for the headset. In case you intend to use your headset for gaming on Xbox, there is a 3.5mm combo adapter included in the package. This will let you hear the sounds in your game and well as the speech of people in your chat party.

The sound quality of the Sennheiser GSP 302 is incredible, no doubt. However, there is a clear distinction between the sound when connected to a laptop and when connected to a desktop. Connected with a laptop, the sound is almost similar to surround sound even though it is only in stereo. But for some unknown reason, when plugged into a desktop, the sound is just significantly low even at the highest volume. This could be passed off as a small error from the manufacturer, but the sound quality is still impressive on console or mobile. It is brilliant and clear. We might just conclude that these headphones won’t be a good choice for gaming on a PC.

We also tested the Sennheiser GSP 302 with console gaming using the Xbox and we heard all the sounds and speech clearly. For example, if you’re a big fan of Destiny, when you’re part of a fireteam or a party chat, you won’t have any difficulty hearing what people are saying as soon as they talk. And for in-game sound, we found this headset to be a better choice for hearing game sounds than a speaker connected to the TV.

Another important thing we should mention apart from the sound quality is the noise-canceling mic on the Sennheiser 302. The downside is that when the volume is cranked up on the PC, the mic picks up everything. And when the volume of the headset is brought down low, it becomes too hard to hear any sound, whether from games or music. Though the mic sounds very clear when chatting during an online game such as Overwatch, it still picks up some noise.

Another strong point of the GSP 302 is that it does a very good job during phone calls and video chat. It can also serve as a good substitute for your regular earbuds if you’re looking for something different to use. As mentioned before, this headset is excellent for gaming on your console and mobile device.